Ben Sherman was 950 miles from home when an accident on the turf he has called home since 2017 left him with a torn ACL and medial meniscular tear, an injury that could take more than a year to mend. That would not be the case for the Troy, Pennsylvania native who is a fullback at William Penn University because of his relationship with Dr. Neil Schwimley from Mahaska Health.

“I was having the best season of my life when a guy hit me low right when I planted and I felt it go,” said Sherman. “I kind of knew what happened.”

Dr. Schwimley, who is a Board Certified, Fellowship-trained Orthopaedic Surgeon and Sport Medicine specialist, was on the sideline when Sherman went down.

“That game you seemed to be getting five to six yards every time you touched the ball,” said Dr. Schwimley. “I remember when you went down, I went out on the field, and you kept your sense of humor.”

Sherman, who has been named to all-Heart of America Conference teams the past three seasons, found his way to Oskaloosa and William Penn almost by accident. As the senior wellness and recreation major tells the story, he answered an email because he thought William Penn was a Pennsylvania college.

“I spoke with coach (Clayton) Norberg, and they offered me a scholarship,” said Sherman. “They run the triple option, which is what I’ve run my whole life. It was a no-brainer to come here.”

Like Sherman, Dr. Schwimley was also new to Oskaloosa, coming to the city of 10,325 after an active duty career with the United States Air Force and three years in the reserves. Dr. Schwimley said he was looking for a new challenge.

“I wanted a change, and I really liked the direction the CEO was going to do for the hospital,” said Dr. Schwimley. “Like Ben said, it was a no-brainer to come here.” 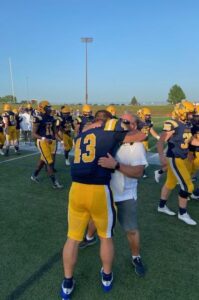 Dr. Schwimley and Sherman saw each other often as part of the sports medicine program at William Penn. It is that relationship that guided Sherman’s choice of surgeons.

According to Sherman his mother wanted him to come home to have the surgery and rehab after the surgery. His answer?

“I have the coolest doctor right here. It was a no-brainer. I wanted him to do my surgery. He explained everything that needed to be done and went in and got it done.”

The injury occurred the first Saturday of October 2020. Surgery was Nov. 3, and he began rehab with the WPU trainers on Nov. 5.

Trainers had told Sherman it could be eight months of recovery. He would have none of that talk and worked to the point he was released on April 15, just over five months from the day of surgery.

“I rehabbed twice a day and started two days after surgery with the William Penn training staff, so I got to know all of the trainers,” said Sherman. “Hats off to them for getting me back to where I am today. It was an excellent experience with Mahaska Health all around.”

Dr. Schwimley and Sherman have forged a bond that goes beyond the doctor-patient relationship. Both have found a home in Oskaloosa. It is a no-brainer that these two have brought their talents to Oskaloosa, William Penn and Mahaska Health.

Special Thanks to R.D. Keep for this story.

Our Orthopaedic and Sports Medicine experts can help you feel better and get you back to what you love. Our Team is dedicated to helping you keep your life in motion and offers the unique benefit of comprehensive care – working directly with your primary care and specialty healthcare providers to ensure your treatment is the best fit for you. To schedule an appointment with our Orthopaedics Team call 641.672.3193. Same day appointments available.